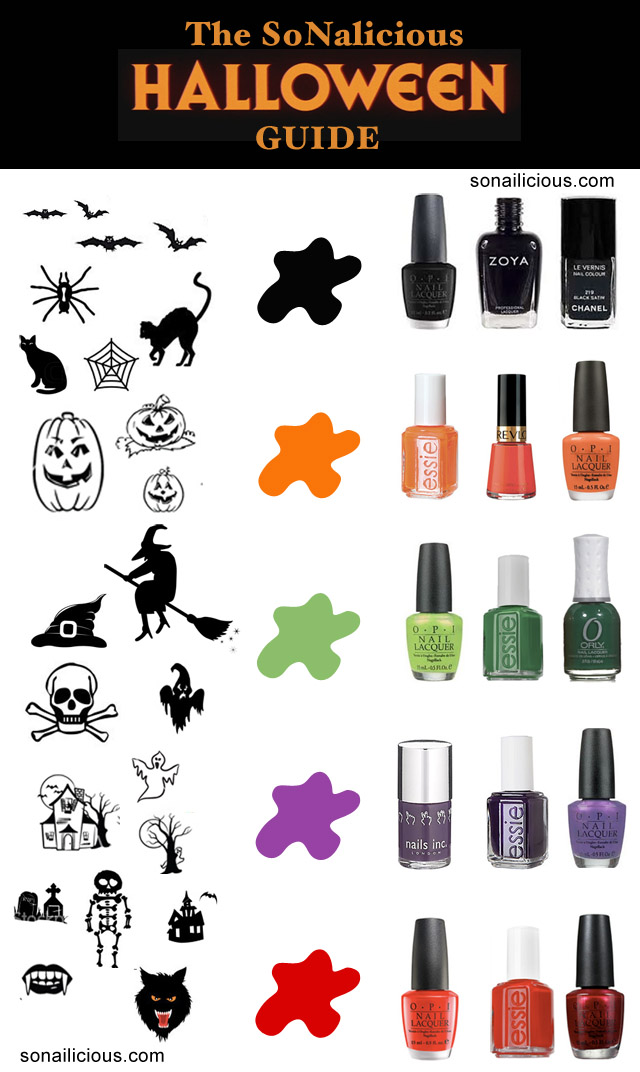 As mentioned in our previous post, Halloween celebrations was a complete mystery to me up until very recently. So when faced with the task of creating Halloween nails I did my homework and researched the history of Halloween. What is this all about, why ghosts, pumpkins and how do they relate to each other?

Today I’m presenting my findings, conveniently compiled as the “Halloween Nails Guide”. This guide will clarify a few questions about Halloween’s history, its symbols, colours and hopefully will also inspire you to try some new nail designs.

Halloween takes its roots from the  Celtic harvest festival of Samhain. The first mentions of the festival date back to the 10th century. It celebrated the end of harvest and the transition into the ‘darker” part of the year. The modern name, Halloween, comes from the 1500s and is a variation on “All-Hallows-Eve’ the night before All Saints Day or All Hallows Day. The Catholic Church had that holiday to coincide with the festival of Samhain to try to win the Celts over to Catholicism.

What do witches, ghosts, vampires and pumkins have to do with Samhain and Halloween?

Halloween festivities are based on magical folk beliefs concerning supernatural forces and spirits of the dead. That’s why Halloween decorations typically feature images of supernatural beings such as witches, ghosts, werewolves, and vampires. Images thought to symbolize bad omens— such as black cats, bats, and spiders, as well as elements of the autumn/harvest season, such as pumpkins and scarecrows, are also reflected in symbols of Halloween.

What are the traditional colors of Halloween and why?

The traditional colours of Halloween are black and orange. They symbolise death and autumn, and the transition between ‘light’ days and “dark” days. Later, green (monsters), purple (night, mysticism) and red (blood) were also added.

Accordingly, here are some of the best nail polishes for Halloween nails:

What are the main symbols of Halloween and why?

These findings helped us to come up with an idea for our Halloween Nail Art – traditional symbols painted in traditional colours. Easy! There are so many other ways however, this Halloween Nails Guide can be used – from home decor to choosing a Halloween costume. So make sure you share this useful guide with your friends!