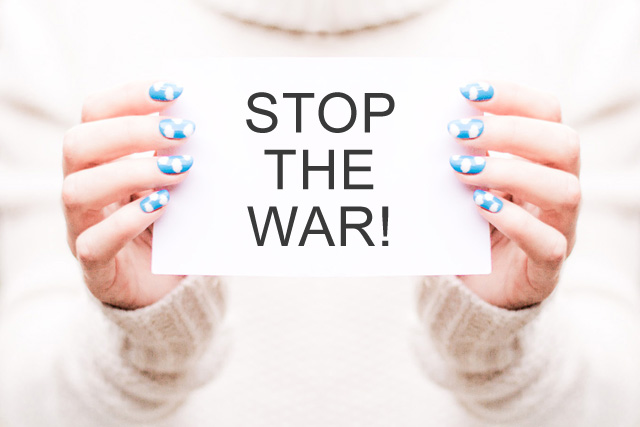 “Non-violence leads to the highest ethics, which is the goal of all evolution. Until we stop harming all other living beings, we are still savages.” – Thomas A. Edison.

Ok, guys, this post will be different. So if you feel like it’s not your thing, please come back tomorrow – we’ll talk about nails, ombre lips and other cool staff. But if you’re feeling dispirited by recent world events and you’d like to make a difference, please read on.

One more thing before we begin… please note that this post is not written to blame anyone or discuss who is right and who is wrong. This post is here simply to appeal to humanity as a whole, to all nationalities, religions and beliefs, to unite and protest peacefully against war. To ask all parties participating in current military actions in Ukraine and Palestine-Israel to cease the fire. To stop the war.

As a mother, as a writer, as a citizen of this world and simply as a human being I feel it is necessary to do whatever we can to stop it. So many popular bloggers support and write about various charities, which is fantastic. But unfortunately I have not seen any bloggers or celebrities trying to raise awareness about the tragedies in Ukraine, Russia, Palestine and Israel. Why? Is it too controversial? I was talking to some charities, here in Australia and none of them are helping children in these countries.

So I’ve been wondering what we ordinary people can do in this situation. Well, it appears we are capable to make things better! There are plenty of examples in history when people (people, not governments) changed the tide of the history without any violence by acting as one. Mahatma Gandhi, Martin Luther King and Nelson Mandela all brought about significant changes for the greater good.

We already have a wonderful and understanding SoNailicious community. This community was formed by something as simple as a common interest in nails, but we’re also mothers, daughters, sisters and even grandmothers. We live in a multitude of countries, have different religions and speak different languages but we all want to live as happily as possible in peace don’t we? No one wants to live in fear. I have close relatives in Sloviansk in Ukraine, friends in Israel and have read a lot about the situation in Gaza. How many of you live or have friends or family there? As complex the current situation in Eastern Ukraine and Israeli & Palestinian is, the solution, I believe, can not be violence.

At the time of writing this post, the current death toll is over 270 civilians including 14 children in Ukraine, over 250 Russians in Ukraine, 298 fatalities from various countries* in the MH17 crash, 417 Palestinians including 70 children and 17 Israelis. Additionally, hundreds of thousands of people have lost their homes and tragically, these numbers look set to continue to grow.

It may be a simplistic view but I also believe, that if the violence and military force continues, nothing will be resolved. There will be no winners. Seeking revenge will result in more victims and more revenge. Moreover, the tragedy has now spread beyond the boarders of the countries involved and violence is spreading across the globe. Let’s not remain silent. Let’s combine the voices of our humble community into one and say “No” to the violence.

One person alone may not make any change, but hundreds, thousands and millions of people can! Together we can attempt to decrease the level of violence, raise awareness around the world and ultimately, we may even save lives. As Mahatma Gandhi said: “Non-violence is the greatest force at the disposal of mankind. It is mightier than the mightiest weapon of destruction devised by the ingenuity of man.”

The impact of peaceful, non-violent protest cannot be underestimated. If as a result of us taking action at least one life can be saved, we have spent out time wisely. Perhaps we can save even more! It all depends on how many of us participate. Without any further blaming or seeking revenge let us simply say “Stop the war!”. Enough is enough. There is nothing more precious in this world than the future of our children. So let’s stand up as a community and protest against the war. Not against other people, nations or beliefs but against war. 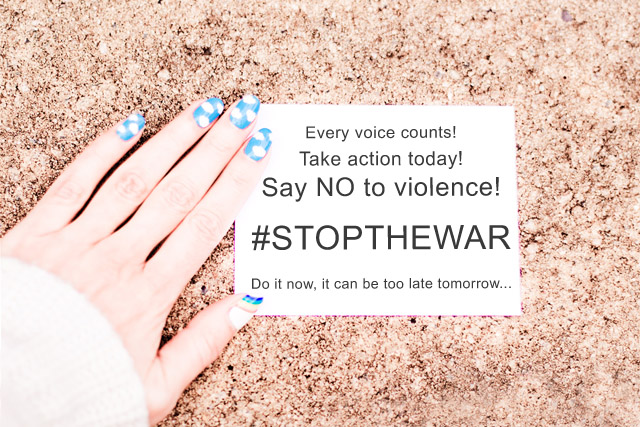 HOW: Join the action by posting on your social media, because that’s one of the most powerful tools we have at our disposal. That’s where we can be influential. Post an image with a simple message “Stop the War!” on your Facebook, Instagram, Twitter or blog. If you can share this post (via email or any other way) with people who also care, that would be fantastic! The more people involved the better!

WHAT: It can be a poster (like mine) or any other image of something light blue to symbolise a clear, peaceful sky (nail art, collage, flat lay) that includes the phrase “Stop the War!”. If you need to learn how to add a text to an image, here are some great apps. You’re more than welcome to use my image, there’s no watermark on it. Whatever you think is best suited to carry our message.

HASHTAG: we’ll use the same hashtag #stopthewar. Please note, with our message we’re not making distinction, we appeal to all sides and all nations.


CAPTION: please add a caption to your image with a reason why you think the war must stop. Please, avoid blaming anyone or making any statements that potentially can be seen as negative or directed against a particular side. Our aim is a peaceful protest against the war, not another swirl of hateful debates.  If you speak any other language, please explain in your native language the purpose of our action.

ADDITIONAL: On next Sunday, 27 July 2014, I’ll post a round up of our activity and re-post some of the best messages/images on @So_Nailicious Instagram too.

Guys, remember that every voice counts – the more of us take action, the more likely we’ll make an impact! Let’s do it!

PS. If you feel like leaving a comment, please keep it positive and constructive. Our aim is to foster peace, not create arguments. Also, if you have some suggestions what else can be done, please let us know! If you know any charity that helps people in the affected areas – DO let us know!!! Comment or email me directly at editor@sonailicious.com.

Tags: Gaza, Israel, nails for the cause, Ukraine
SHARE: