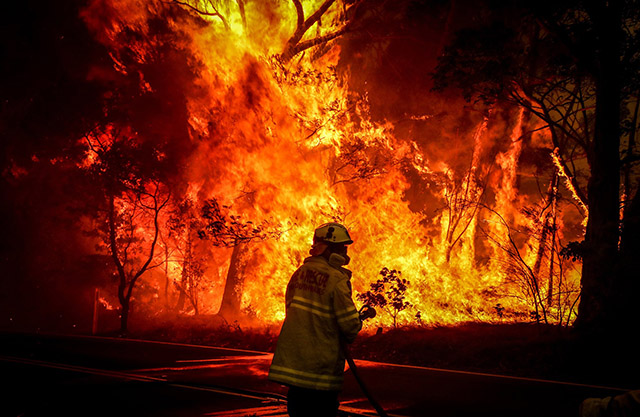 As hard as it is for me to write this post, I have to share the shocking truth about the catastrophic Australian bushfires with you. There has been so much misinformation circulating in the media, that as an Australian and global citizen I feel it is my duty to present you the actual facts on this disaster. Mainly because your future and future of your children depends on it too. The horrific fires that millions of Australians, including myself have been surviving through for the last 4 months, is not just our local problem. This is a GLOBAL catastrophe fueled by the human driven climate change. Yet the mainstream media does not want you to know about it.

Read on and make up your own mind on why these inconvenient facts are being concealed from you.

There has been a significant media speculation about the cause of the Australian bushfires. For instance, false information about arsons and green policies have been circulating online in order to divert public attention from the climate crisis issue. The official numbers provided by police and fire authorities reveal that only about 1% of the land burnt in NSW can be attributed to arson, and it is even less in Victoria. According to Geoscience Australia, the most common cause of the bushfires is dry lighting, while high temperatures, dry landscapes and strong winds are the main factors contributing to the fire intensity and speed at which it spreads.

Additionally, some media have attempted to paint the catastrophic fires as completely ‘normal’ for Australia. Yes, Australia has always had bushfires. But scientists say the fire conditions in 2019 and 2020 are fundamentally different and worse in many ways, when compared with the fire events in the past. The director of the Fire Centre at the University of Tasmania, David Bowman says the unprecedented nature of the current Australian bushfires can be seen through their intensity and geographical spread across the country. There have been massive fires in 7 out of 8 Australian states burning for over 4 months. A number of world heritage areas that had not burned for more than 1,000 years, like Gondwana forest in Tasmania, have been wiped out.

Higher temperatures, extreme dryness, extreme bursts of fire weather and the spread of fire across the country, Bowman says, all align with scenarios painted by climate change forecasts. While climate change itself does not cause fires, greenhouse gas emissions have a clear impact on rising temperatures and, through that, are linked to prolonged droughts and extreme temperatures in Australia, which in turn lead to catastrophic fire conditions. 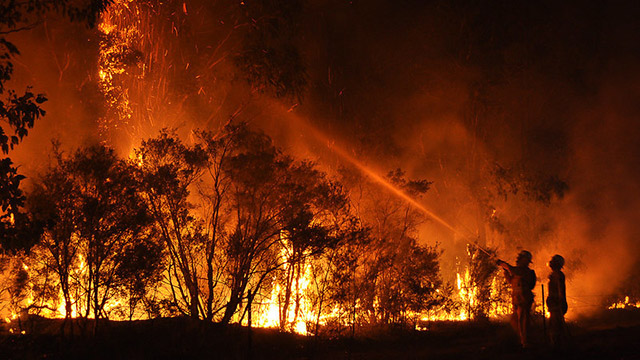 Why Australian bushfires are so bad?

To help you understand the severity of the fire crisis, here are a few numbers, as of 20 January 2020: 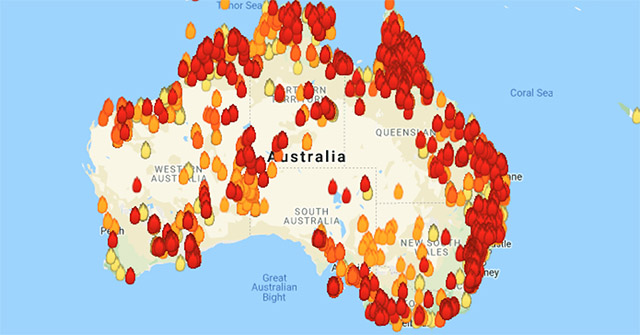 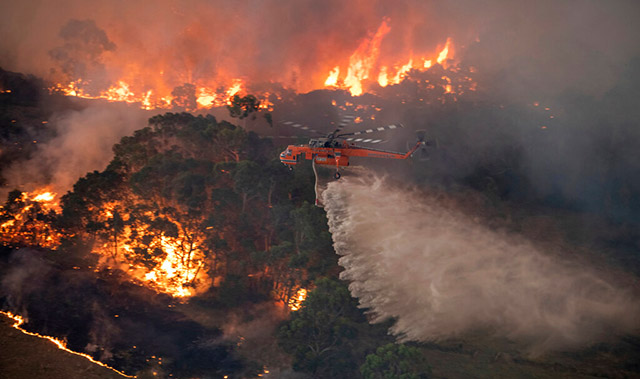 A helicopter tackles a wildfire in East Gippsland on Dec 30, 2019.  Photo: State Government of Victoria. 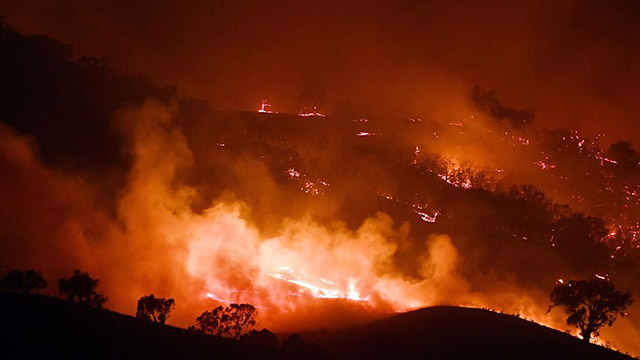 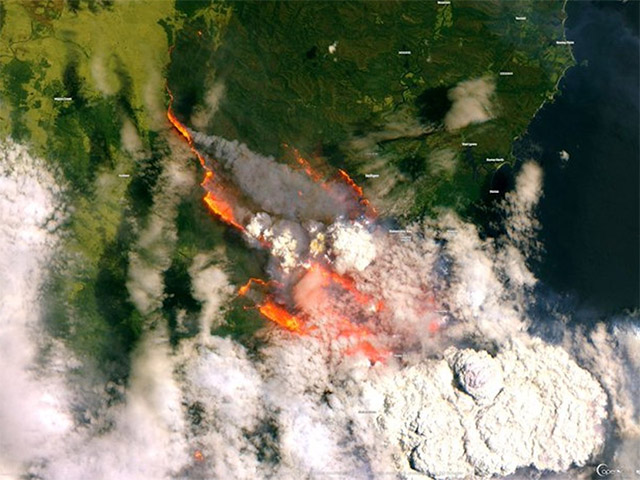 Despite the obvious severity of the fire crisi, Australian Government failed to act accordingly. In the middle of the crisis, our Premier Minister Scott Morrison rejected calls for more bushfire help, saying volunteer firefighters ‘want to be there’. During the crisis, Morrison kept refusing to speak about the link between climate change and the unprecedented fires. Moreover, at the height of the fire crisis, Morrison escaped Sydney’s bushfires on a business class flight to have a holiday in Hawaii.

Only in December 2019, after the fires have been ravaging the state for 3 months, the NSW Government declared a state of emergency when record-breaking temperatures exacerbated the bushfires. Meanwhile, close to 3,000 firefighters (90% of those are unpaid volunteers) have been fighting the fires since September 2019 as Morrison’s government refused to help. As public anger have peaked after the Mallacoota crisis during New Year with over 4,000 people fled to the shore and waited on the beach for 3 days to be evacuated. Later reinforcements from all over Australia, including Australian Defence Force and reservists were called in to assist fighting the fires in New South Wales and Victoria. Also firefighters from New Zealand, Singapore, Malaysia, Canada and the United States, among others, arrived to help fight the fires.

As a response to the government’s inaction, a wave of public protests swept through the country. Over 20,000 thousands of Australians took to the streets to call for more robust action on climate change on 10 January 2020. Morrison now claims that his government has always made a link between climate and fires intensity and they have a strong climate policy in place. He also says Australia is already “meeting and carrying” its burden on greenhouse gas emissions. Yet in reality Australia’s carbon emissions are rising every year and there is no clear ‘climate policy’. Also Australia is the biggest exporter of coal worldwide; Morrison says his government will not consider downsizing Australia’s coal industry, despite the known link between the fire and climate change. 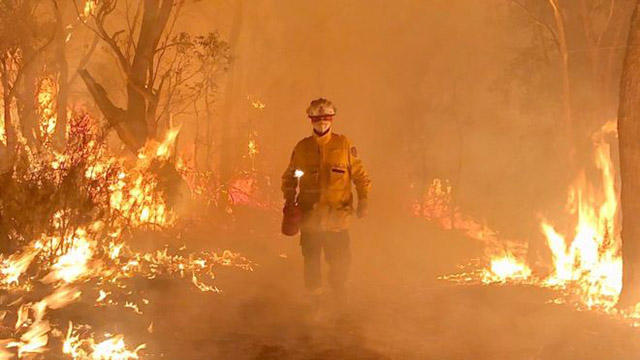 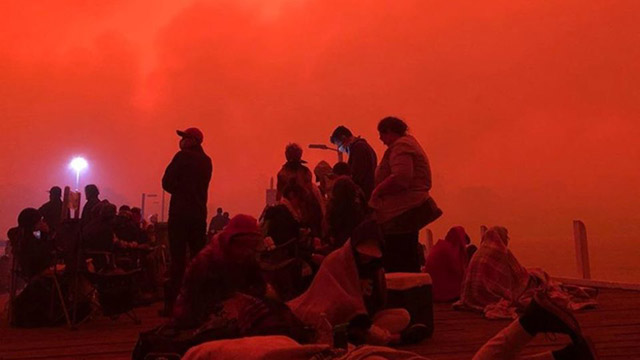 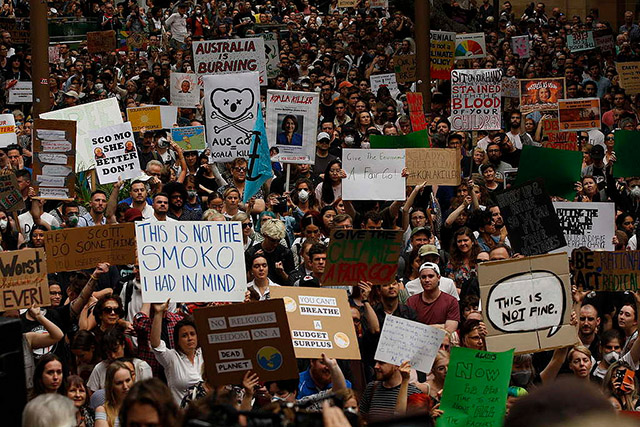 Over 10,000 protesters at the Sydney’s rally against Australian Government’s inaction during the fire crisis. Photo: © Dean Sewell / Greenpeace

Why Australian fire crisis is a GLOBAL catastrophe:

1. Massive increase in CO2 emissions. As of 2 January 2020, NASA estimated that 306 million tonnes of CO2 had been emitted by the Australian bushfires, which is more than half of country’s total carbon emissions of 535 million tonnes in 2018. Normally the carbon emitted by the fires would be reabsorbed by forest regrowth but this might not happen at all if prolonged drought has damaged the ability of forests to fully regrow. Which brings us to…

2. Escalating climate crisis. If there’s no forest to reabsorb carbon emitted by the fires then it will go straight in the atmosphere, dwarfing humanity’s already inadequate attempts to cut down CO2 emissions. That means in the very near future, we will experience even more intense effects of climate change – even higher temperatures, longer droughts and much worse bushfires. These events yet again will push climate change even further to the next level of horrible. You get the idea? From now on every year we will be witnessing and experiencing more catastrophic weather events, which will also intensify from year to year.

You see, the massive Australian bushfires did not happen randomly, in part they were the aftereffect of the huge Californian, Amazon and Siberian wildfires. The sinister reality is that the Australian fires due to their magnitude sped up the climate crisis snowball effect even more and right now, all of us, the entire planet is rolling down the slope fast towards a point of no return.

3. Escalating biodiversity crisis. Prof. Chris Dickman estimated on 8 January 2020 that over 1 billion animals were killed by bushfires in Australia, while more than 800 million animals were killed by fires in NSW alone. Furthermore, animals that survived fires are now left without habitat and food to sustain themselves. Dozens of critically endangered species could be completely wiped out and threatened species are now facing a risk of extinction. Scientists fear that Australia’s and consequently, world’s biodiversity suffered immense damage it may never recover from. 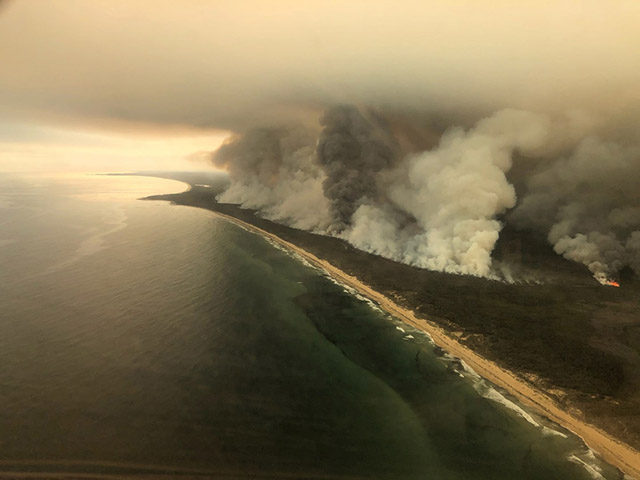 Thick plumes of smoke rise from bushfires on the coast of East Gippsland in Victoria. Photo: Australian Maritime Safety Authority/Reuters. 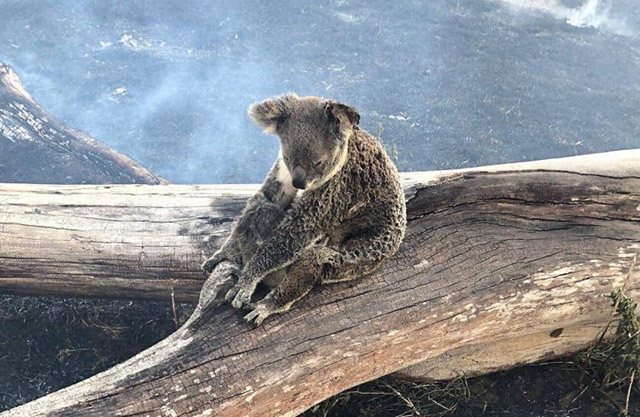 A koala and her joey rescued by police during the Gold Coast Hinterland bushfires. Photo: QLD Police Service. 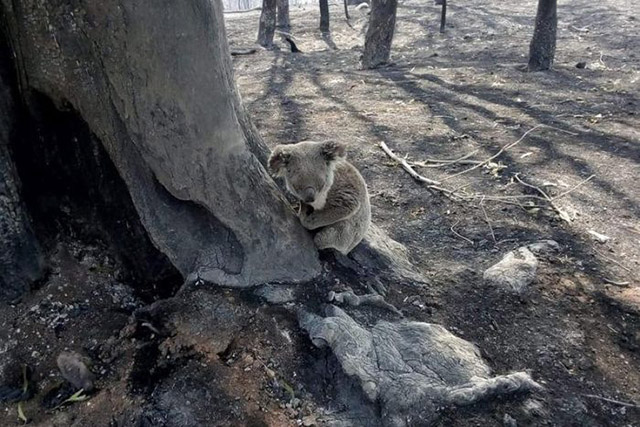 Koalas are now forced to the ground and in danger from red foxes and feral cats. Photo: ABC / Lee James. 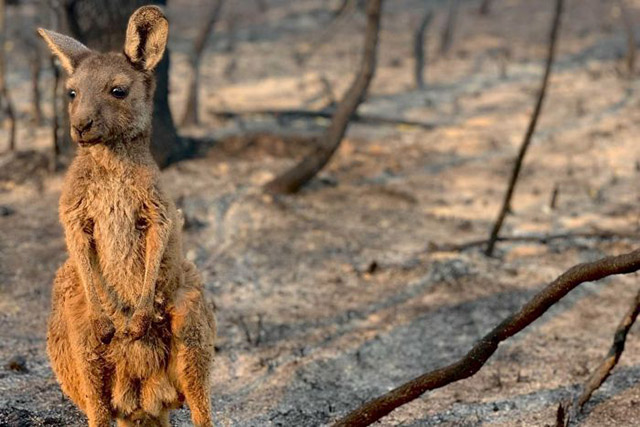 Not all wildlife have adapted to stay put after a fire, and moving in search of safety. Photo: ABC / Ryan Pollock. 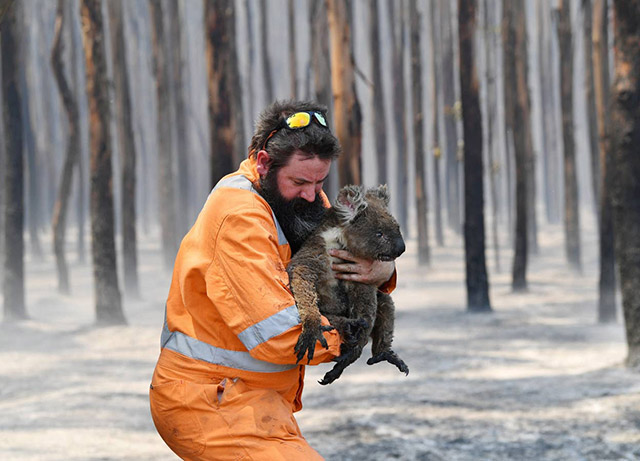 Adelaide wildlife rescuer Simon Adamczyk carries an badly burnt koala on Kangaroo Island, South Australia. Half the island’s 50,000 koalas are estimated to have perished in the fires. Photograph: David Mariuz/AAP 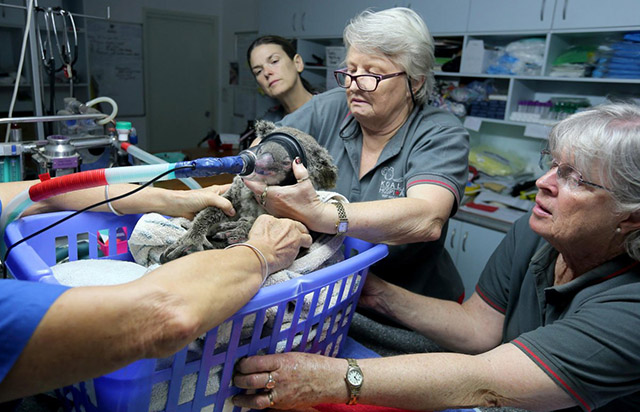 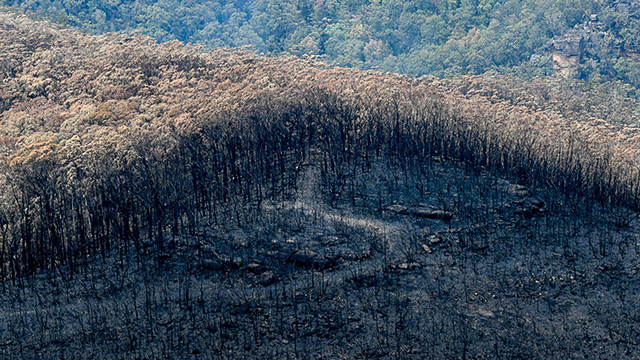 The charred ground which the RFS have called the ‘Ground Zero’. Photo: ABC News / Brendan Esposito. 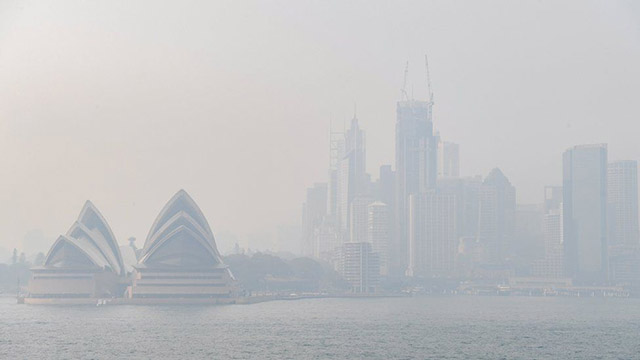 Sydney has been covered by thick smoke from bushfires outside of the cit. Photo: Getty

Did the rain help the fires in Australia?

Thank the Universe for sending rains to Australia to cool down our burning country. Firefighters say rain is helping to weaken fires but it is not enough to extinguish all the blazes. It also unlikely to bring an end to the 3-year drought that helped the fires form and spread so far. While the rain has certainly brought much-needed relief from the fires and cleared up the air, it has also brought new disasters: 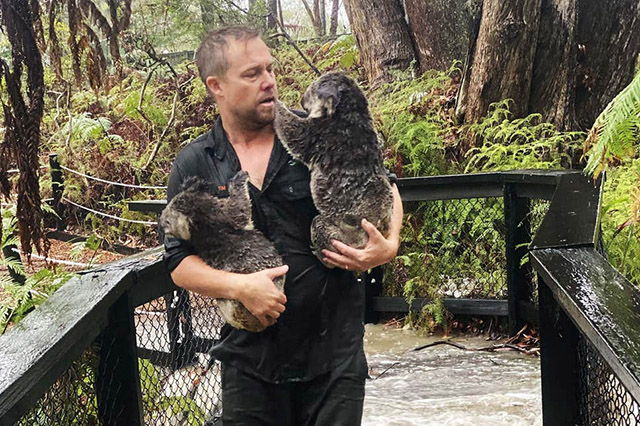 A staff member carrying koalas during a flash flood at the Australian Reptile Park in Somersby.
Photo: AUSTRALIAN REPTILE PARK/AFP.


So, where do we go from here?

In a world that is clearly heating up yet the political leaders keep telling us “not to panic”… where scientists warn that these unprecedented Australian fires, turbocharged by climate change is just a preview of what’s at state… yet mining giants are still allowed to keep cooking the planet. Do we even have a chance to stand against the entire system, where government and media work together to protect the coal billionaire’s interests rather than lives of ordinary people, like you and me? And even if we protest, day after day, how many protests will it take to change the system, if it’s possible to change at all?

As desperate our current situation is, there is still hope that we can transform the current failing system. We, ordinary people, can certainly initiate this change by first adjusting our individual lifestyles. We are the end consumers of fossil fuels. It is us, for who the coal and gas is burning, us, who generate milliards of tonnes of waste every year and us, who mindlessly destroy the nature everyday with our bad habits. Yes, we must continue to demand the climate action from our leaders but we also shall look at ourselves and fix our own lifestyles first.

As more people, like you and me, start taking responsibility for the collective damage we do to the planet, maybe then a fundamentally new, worldwide culture will emerge, where not the greed but love and care for the nature rules…  We’ve been destroying it for so long, so if not now, then when is the right time to start loving it?

Tomorrow I will also share my list of New Year’s resolutions to reduce my own footprint, I’m sure you will find some of these simple initiatives useful too.

HOW YOU CAN HELP:

If you want to help to save wildlife affected by the Australian bushfires, please donate our Koala Savior fundraiser or directly to the Wildlife hospitals (all links in the fundraiser page). 100% profits will go straight to the wildlife hospitals that need help right now and to WWF to replant the burnt forest.