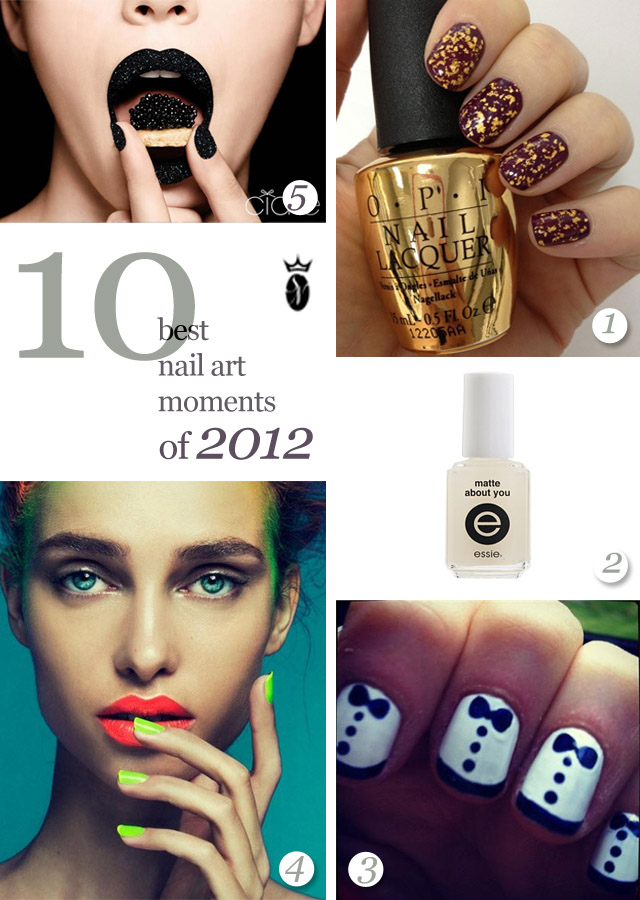 Astonishing, funny or revolutionary these nail art moments had the entire world talking about them. Find out why!

1. OPI The Man with the Golden Gun. An 18kt real gold top coat that contains gold flecks for a striking manicure! It was probably the most coveted ($30 for a bottle in Australia) and the most talked about polish in blogosphere in 2012.

2. Matte Top Coat. We had them glossy, we had them shiny. Essie changed that by introducing Matte About You top coat that led to the whole new trend in nail art.

3. Zooey Deschanel’s Tuxedo nails. Once they were spotted at the Golden Globes, those nails immediately went viral on Instagram resulting in “OMG! So cute!” screams all around the world. That photo above is the actual Zooey’s photo.

4. Neon nails. We only hope we won’t be ashamed of fluoro nails in the same way we’re now ashamed of wearing shoulder pads in 90-s..

5. The famous-infamous Caviar nails. As pretty as it is, this manicure has a footprint of controversy on it. While Caviar nails were first created by Pattie Yankee and Dashing Diva for 2011 Cushnie et Ochs fashion show, in 2012 Ciaté marketed them as their own invention. They even started a war against nail bloggers for posting DIY caviar nail art. We love caviar mani regardless, don’t we? 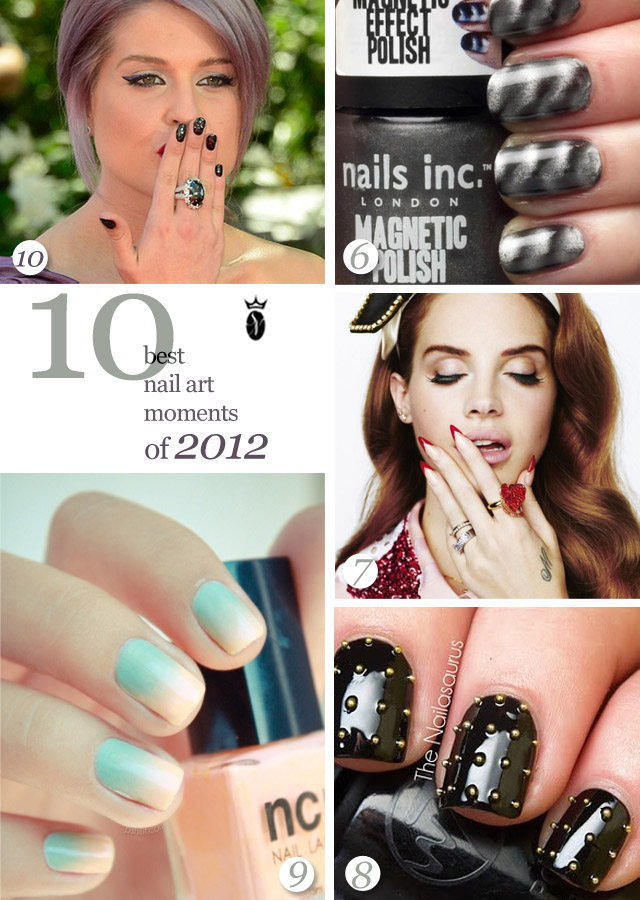 Del Rey’s talon-like nails left us speechless yet many of musicians happily picked up ‘elongated’ nails. Love or hate her but Lana set a major nail trend!

8. 3 D nails. Pushing the boundaries of imaginable we’re now attempting to embed into our nail art anything that is embeddable. Not blaming us for that, 3 D nail art can look amazing!

10. $250,000 nail polish. It exists! Kelly Osbourne wore that polish made from 267-carats of black diamonds to the Emmys. Diamonds are girl’s best friends! No?

Did you enjoy this post?
Then stick around! Subscribe to SoNailicious Newsletter to get our weekly email updates or follow us via Bloglovin for daily updates.